Periodically I am asked how to get rid of some bug or another. If I am giving a public talk, I want to reply, “have you not been paying attention to anything I’ve said for the past hour?” If the question comes in the form of a comment on this blog, I have to wonder what possessed the person, rather than asking any of the innumerable extension entomologists or pest control specialists out there, to instead ask the author of a website dedicated to celebrating the natural history of insects—it says “Bringing glory to Earth’s small and neglected creatures” right there at the top, for crying out loud.

For future reference, here is the sum total of my experience dealing with insect pests: When Japanese beetles are abundant in my yard, I walk around with a bowl of water (with a drop of soap added to break up the surface tension), knock them into it, and give them to my chickens. When cabbage white caterpillars are abundant on the broccoli or some other Brassica, I pluck them off and give them to the chickens. When the Pegomya leaf-mining flies show up on the spinach or chard, I try to eat the leaves before the eggs hatch or the larvae get too big; if I miss some, those leaves go to the chickens. That’s pretty much it.

Today I was delighted to find larvae of the beetle Baliosus nervosus mining the leaves of our cherry, plum, and medlar trees—all of these were previously undocumented hosts for this species, and the beetles confined their damage to less than one leaf per tree. I was mildly concerned when I saw this mass of tiny caterpillars on one of the plum trees:

I believe these are young larvae of Schizura concinna (Notodontidae), which I found four years ago on the neighboring cherry tree:

The next year I found some nearly mature ones busily defoliating our young persimmon tree:

These caterpillars are hungry and numerous, so they’re not the best thing to have on a fruit tree, but I don’t hold anything against them. Today, as before, I plucked the leaf they were on and moved them to a wild black cherry tree at the edge of the yard, which they can munch to their hearts’ content as far as I’m concerned. There, they were greeted by another caterpillar…

…which appears to be Acronicta radcliffei (Noctuidae). Also on that black cherry tree was this Callosamia promethea caterpillar:

(It was actually hanging head-down, but I rotated this photo 90 degrees to better fit the format of the blog.) Bigger (than 1 cm) moths are not my forte, and I confess to having initially mistaken this for a young cercopia. While I was out documenting the charismatic megafauna on my fruit trees, I figured I might as well get a shot of this caterpillar I’d spotted earlier in the day on the medlar:

This is another notodontid, Schizura unicornis, and it is quite dead—perched atop a logpile of cocoons spun by the microgastrine braconid wasp larvae that until recently were feeding inside it. Look closely and you’ll see that the side of its abdomen is riddled with their exit holes.

It’s just as well that the things I wanted to photograph today were on the large side, because this morning I sent my beloved MP-E 65mm macro lens off to the Canon Factory Service Center to be repaired. This was actually my second MP-E 65, which I’d bought as a backup when the first one developed the same problem, but apparently I’d never gotten around to sending the first one off to be repaired, so I actually sent both lenses off today. Hopefully I don’t come across anything tiny that needs photographing in the next couple of weeks, because I don’t think a third $1000 lens is in the cards for me.

One of the last things I was able to photograph before my backup macro lens gave up the ghost was this 1-mm entedonine eulophid wasp (Horismenus fraternus, I believe), which coincidentally also came from a caterpillar on a rosaceous fruit tree:

On Saturday afternoon, on my way home from teaching a week-long course on leafminers at the Eagle Hill Institute in Maine, I stopped at Mt. Wachusett in eastern Massachusetts to lead an insect walk at a BioBlitz event. The walk ended in an old orchard, where we found several species of leafminers on the apple trees, including underside tentiform mines like this one…

…made by a species of Phyllonorycter, likely blancardella. I collected a few mines to try and rear adult moths, and on Tuesday the wasp emerged from one of them. Yesterday after I had photographed the wasp, I located the mine that had an exit hole and opened it up to see what other evidence the wasp had left behind. I discovered that rather than being a primary parasitoid of the moth larva, this wasp had emerged from the cocoon of a microgastrine braconid wasp (in the genus Pholetesor, I believe), the larva of which was what had actually done in the leafminer.

Here’s a view of the braconid cocoon inside the Phyllonorycter leaf mine, with the eulophid’s exit hole toward the left end:

Had the braconid not been parasitized by the eulophid, here’s what would have emerged from that cocoon:

And had the moth larva not been parasitized by the braconid, here’s what would have emerged from the leaf mine: 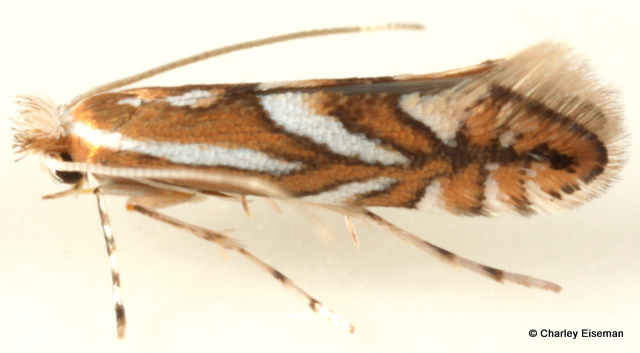 I am a freelance naturalist, endlessly fascinated by the interconnections of all the living and nonliving things around me. I am the lead author of Tracks & Sign of Insects and Other Invertebrates (Stackpole Books, 2010), and continue to collect photographs and information on this subject. These days I am especially drawn to galls, leaf mines, and other plant-insect interactions.
View all posts by Charley Eiseman →
This entry was posted in Uncategorized and tagged Acronicta, Acronicta radcliffei, apple, BioBlitz, black cherry, Braconidae, Callosamia promethea, caterpillar, cherry, cocoon, Datana, Eulophidae, Gracillariidae, Hymenoptera, hyperparasitoid, larva, leaf mine, Lepidoptera, Malus pumila, Microgastrinae, moth, Noctuidae, Notodontidae, parasitism, parasitoid, persimmon, Pholetesor, Phyllonorycter, plum, Prunus, Prunus serotina, Saturniidae, Schizura, Schizura concinna, Schizura unicornis, wasp. Bookmark the permalink.

13 Responses to Sharing the Fruit Trees