Now that I’ve declared my intention to find as many sawfly larvae as possible, they’re starting to show up everywhere I look. Today Julia and I made a rare trip away from home, lured by the news from my mother that the tuliptree I planted 20 years ago (which is now ~50 feet tall) is in full bloom. The moment we stepped into my parents’ yard, I spotted a sawfly larva on a gooseberry bush being eaten by a harvestman, which in turn was being harassed by a flesh fly. I didn’t have my camera with me, but Julia took one picture with her phone:

I’m not sure if the fly was trying to drink juices from the sawfly larva or what. At first it just sort of glommed onto the harvestman, which didn’t seem to be paying much attention to it, but after a while the harvestman walked several inches away and the fly lost track of it. It kept landing on leaves where the harvestman had been and shuffling around in tight little circles, as if it was scent-tracking the harvestman and couldn’t just see where it was. Once or twice it did manage to relocate the harvestman but then immediately lost it again and went back to frantically searching. Eventually it gave up and flew away.

I’ve also bumped into four new kinds of sawfly larvae in our own yard over the past few days.

Sawfly #7.  A couple of years ago, Julia and I salvaged several shrubs from a local community garden shortly before it was razed so that a new senior center could be built. One of these shrubs was a shadbush (Rosaceae: Amelanchier; I haven’t yet gotten around to figuring out which species) that is now happily growing right next to our garage. On Sunday morning, I noticed a cluster of tightly rolled leaves on one branch.

I normally don’t pay much attention to leafrollers—virtually all of which are moth larvae—but with sawflies on the brain, it occurred to me that some sawflies are leafrollers on rosaceous trees and shrubs. So I took a peek in one of the rolls, and sure enough, there was a pair of little sawfly eyes peering back at me. 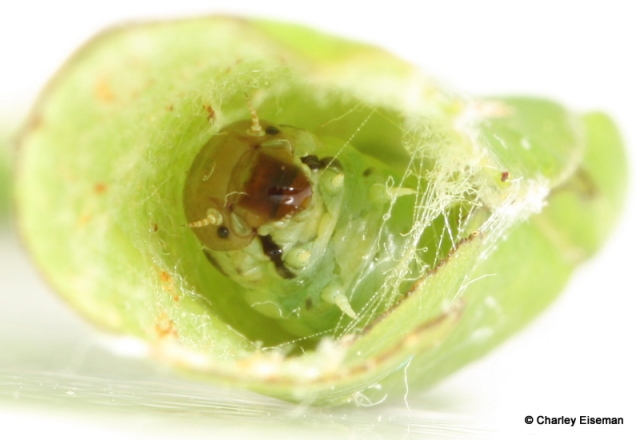 This turned out to be a lucky first try, because I then checked all the other rolls and found them empty. So I collected this one to see if I can rear it. I unrolled the leaf roll to get a look at the whole larva; it made a new one by the end of the day. 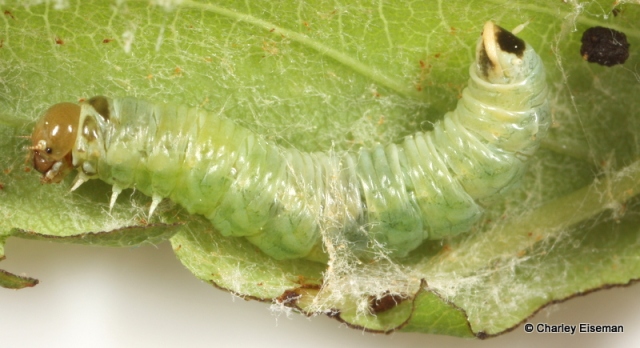 My preliminary review of sawfly host records has turned up two species that roll leaves of Amelanchier: Pamphilius rileyi and P. semicinctus. So this is likely to be something in the genus Pamphilius, if not one of those two species.

This morning, the larva had abandoned its leaf roll, had turned bright green, and was acting restless—sure signs that it had finished feeding and was ready to pupate. I dropped it in a jar of soil and it burrowed down within seconds.

Sawfly #8.  On Sunday afternoon, I checked on a little wild indigo plant (Fabaceae: Baptisia tinctoria) that I had planted in the front yard last fall, and there were three butterfly eggs on the leaves: 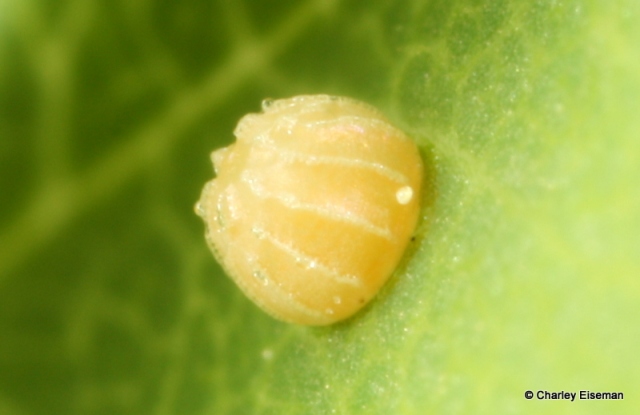 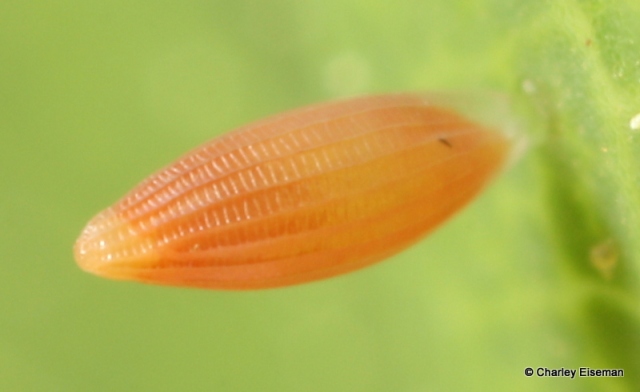 I’m not sure what the first two are, but the third one belongs to a sulphur (Pieridae: Colias) of some sort. Hopefully the plant can grow fast enough to accommodate three hungry caterpillars… Anyway, as I was admiring these eggs, I noticed this sawfly larva climbing up a violet petiole right behind the wild indigo:

I’m guessing it’s a Dolerus of some sort. This is a genus with over 80 North American species, and as I mentioned previously the adults are among the first sawflies to appear in spring. Very few species have been reared, but most apparently feed on either grasses or horsetails. I kept this larva in a jar overnight with the violet leaf and some grass, but it hadn’t eaten anything the next morning so I put it back where I found it.

Sawfly #9.  Later on Sunday, I checked a pussy willow (Salicaceae: Salix discolor) that I’ve been watching expectantly, knowing that well over 100 North American sawfly species feed on willow. A few of the leaves were stippled in a way that at first glance resembled the feeding sign of lace bugs… 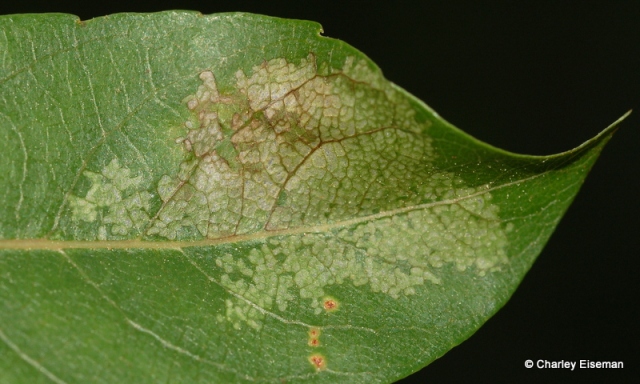 …but I flipped it over and found that the pattern was caused by “window feeding” by a group of newly hatched sawfly larvae. 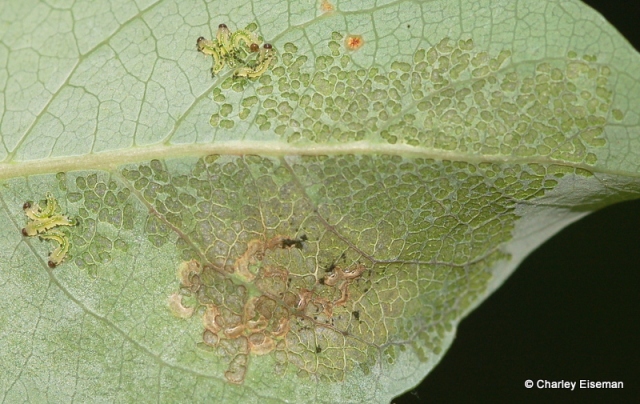 What kind are they? I have absolutely no idea, but I’ll do my best to rear them to adults.

Sawfly #10.  This morning I found what I think is a different species of Dolerus resting on a wild madder (Rubiaceae: Galium mollugo) stem in the backyard.

I have it in a jar with some wild madder right now; so far there has been some pooping but no feeding, and I assume I’ll be letting it go tomorrow morning, not knowing what its host plant is. Probably both of these Dolerus larvae are grass feeders, and I don’t know what they’re doing hanging out on other plants.

As for the leafminers: Even as I was writing my last yard list update, the gracillariid larva from the underside tentiform mine on paper birch exited its mine and began busily spinning silk to create the leaf flap inside which it will do the rest of its feeding—thus revealing itself to be a Parornix rather than a Phyllonorycter.

It may or may not be the same species as this one I reared from gray birch in my yard six years ago, but if not, it’s one of several other species that look pretty much the same.

By Sunday night, the fold was complete:

#40: Epermenia albapunctella (Epermeniidae).  On Sunday afternoon I noticed some wild carrot (Apiaceae: Daucus carota) on the south side of the house turning brown due to window feeding by larvae of this moth.

This is another example of a native insect expanding its diet to include an introduced European plant. No one had reported E. albapunctella to feed on wild carrot, or to start out as a leafminer, until I reared it in my yard three years ago*. Here are a couple of the tiny leaf mines I found in association with the larva shown above:

And here is one of the adults I reared from wild carrot three years ago:

Before I move on to the next species, I must point out the wee, adorable, matching orange globular springtail and thrips nymph that were hanging out in the Epermenia larva’s webbing:

#41: Liriomyza eupatorii (Agromyzidae).  Later on Sunday afternoon I found a mine of this species, complete with the characteristic spiral at the beginning, on a goldenrod leaf right near my front door.

This species can be found on several different genera of Asteraceae. 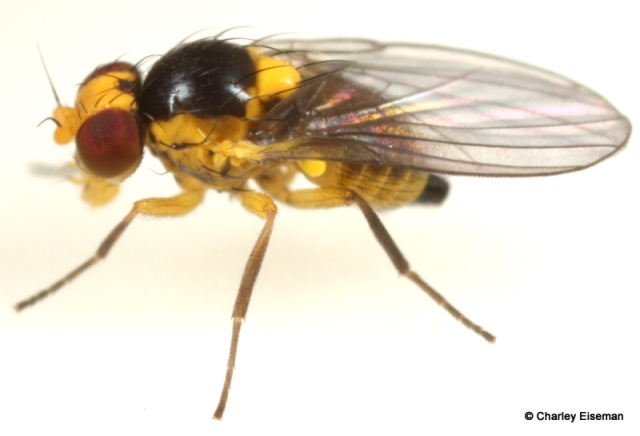 #42: Liriomyza arctii (Agromyzidae).  A few minutes later I noticed the first mine of this species on an oxeye (Asteraceae: Heliopsis helianthoides) growing along the driveway. For more about this species, see this post from last fall.

#43: Liriomyza galiivora (Agromyzidae).  Had I not sat down to take a picture of that sawfly larva on the wild madder this morning, I never would have noticed this tiny leaf mine on the same plant:

Most Liriomyza species have yellow adults, but this one is unusually dark, and until recently it was placed in a different genus, Galiomyza. Europeans have been largely ignoring the taxonomic changes made by North American agromyzid taxonomists in the past decade or so and are still using the old name. 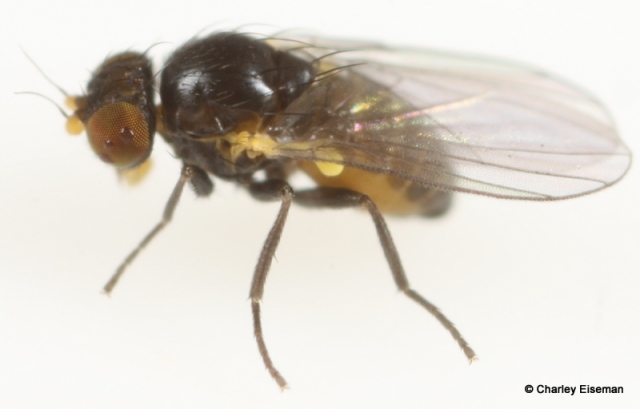 Also on that sprig of wild madder, in addition to some meadow spittlebug spittle…

…were two rows of white mystery thingies poking out of the stem.

Maybe I’ll find out what they are by keeping the sprig in the jar, but I’m not counting on it.

#44: Phyllocnistis vitifoliella (Gracillariidae).  At the edge of the yard right near that wild madder, I found three larvae of this moth mining away in a leaf of fox grape (Vitaceae: Vitis labrusca).

As with all Phyllocnistis species, these mines will remain linear throughout their length, and the larvae will pupate in slight enlargements at the ends of the mines.

On a neighboring grape leaf, there was evidence of two more micromoth species:

On the right is a young gall of Heliozela aesella (Heliozelidae), a member of a family whose other North American species are all leafminers as far as is known. On the left is the case of a casebearer moth (Coleophoridae: Coleophora)… but grape is not a host for any known Coleophora species. This is just where the larva has attached itself to pupate. I looked up and saw a few Coleophora mines on the black cherry tree directly overhead.

A closer look at the case found on the grape leaf:

There are four Coleophora species known to feed on Prunus in North America, but my key to Prunus leafminers easily identifies this one as C. pruniella—leafminer #45 for this spring’s yard list. I had found a similar case yesterday on a young pear tree in the front yard, which is a plausible host for Coleophora but there was no associated feeding sign. After finding this one today, I realized that the pear tree is likewise right under a black cherry tree.

* Eiseman, Charles S. 2019. A review of natural history data for Nearctic Epermenia Hübner (Lepidoptera: Epermeniidae), with the first account of the larval habits of E. albapunctella Busck. Proceedings of the Entomological Society of Washington 121(1): 107–114.