If you have somehow been keeping up with all these posts, you will recall that back in Episode 10 I found a sawfly larva on lady fern (Athyrium angustum) next to my house.

Yesterday I stepped out the front door to grab a new fern for it, since the original one was starting to dry out. I had just stepped off the stoop when something caught my eye. There is a white vervain (Verbenaceae: Verbena urticifolia) growing right next to the lower step, and on one of its leaves there was a piece of bird poop. But something about it made me take a closer look, and I discovered that the poop was in fact a moth: 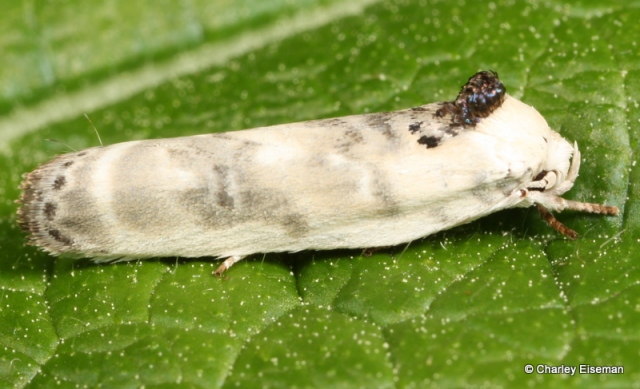 This close-up portrait doesn’t do justice to how good a job it was doing mimicking bird poop. This is an Antaeotricha (Depressariidae), and it looks like a good match for A. leucillana, the “Pale Gray Bird-dropping Moth.” Larvae of Antaeotricha species are mostly leaftiers, although A. leucillana has also been reported to bore into apples, and as revealed in the most recent installment of the second edition of Leafminers of North America, at least one species mines into the tied leaves that constitute its shelter.

And once I was looking closely at the white vervain, I noticed this mating pair of fancy little leafhoppers on another leaf: 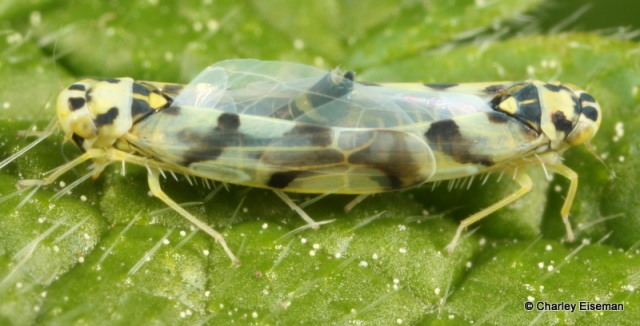 But eventually I made it to the patch of lady ferns by the corner of the house. Now the problem was, I literally could not find a frond that didn’t already have sawfly eggs or larvae on it, and I didn’t want to mix things up because it’s becoming clear that there are two different species of sawflies on the lady ferns around my house.

Here’s one of the eggs I found on the underside of the frond I ended up picking: 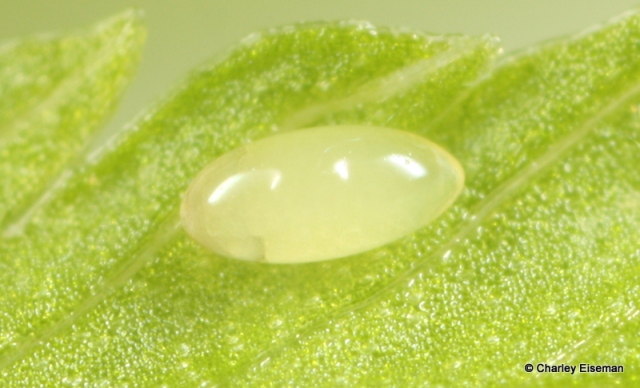 Normally, it wouldn’t have occurred to me that this was a sawfly egg, because most sawflies use their sawlike ovipositors to insert their eggs into plant tissue, and this was just stuck to the surface. But the other day I happened to look back at a series of photos I’d taken four years ago of a sawfly (Strongylogaster tacita) laying an egg on an interrupted fern (Osmundaceae: Osmunda claytoniana) in the woods behind my house. 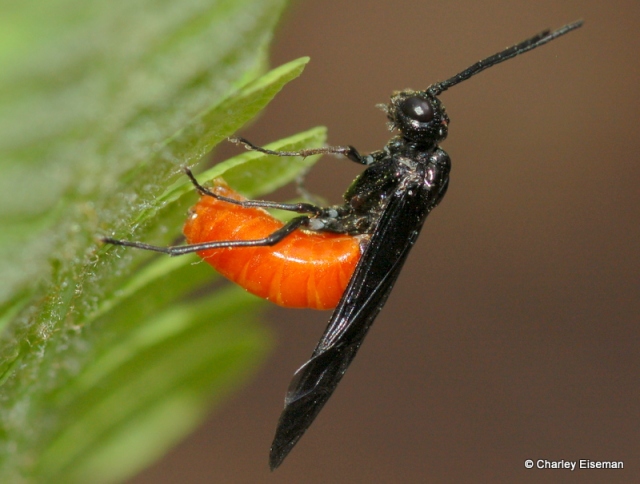 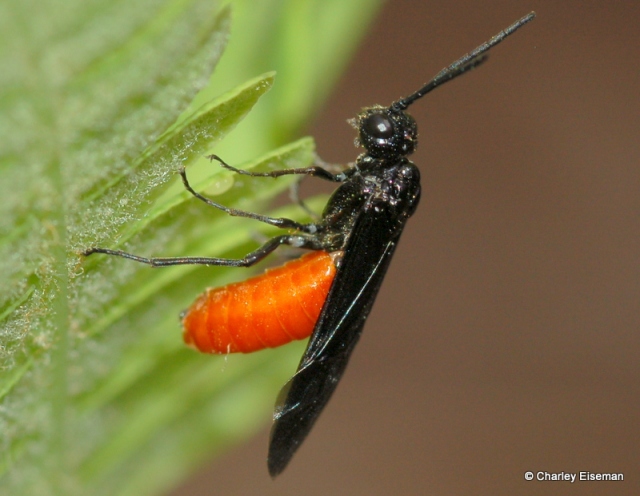 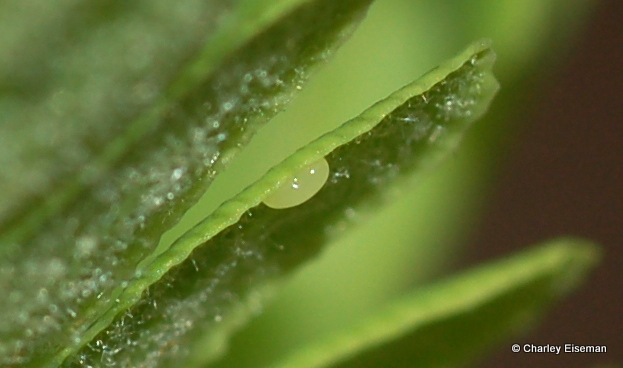 As you can see, she left behind a similar egg on the underside of a pinnule.

Also, looking at another egg on that same lady fern frond, I could see the outline of a sawfly larva curled up inside, its dark eyespot at the bottom: 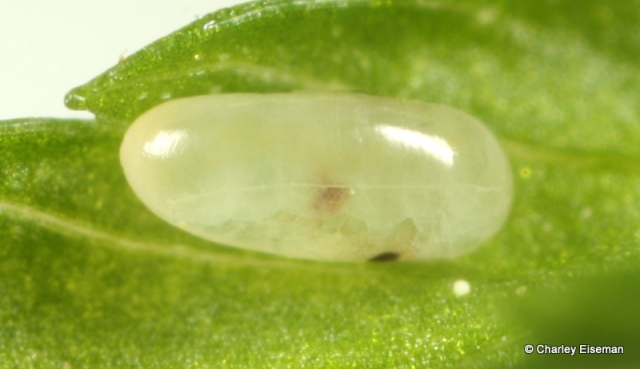 The frond I picked also had two young larvae on it:

Like the first lady fern larva I’d found, these were both pale greenish with brownish heads, but the one in the lower photo also has a dark stripe behind its eye. On a recent walk in the woods, I found a large number of larvae of varying sizes that all had this feature, and the larger ones also had black “noses” and were wearing little black hats. As I continued my search for a lady fern in my yard that was uncontaminated by sawflies, I found several of these larger larvae:

Meanwhile, some of the similar ones I’d collected from the woods were starting to turn purplish, suggesting that they were ready to pupate: 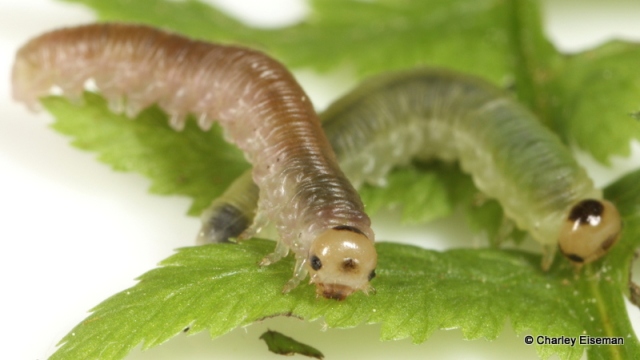 Fortunately, Dave Smith had tipped me off that fern-feeding sawflies don’t burrow into soil to pupate; they need something like punky wood to bore into. MJ Hatfield has had success with a cork, and I have a box of old wine corks heading my way shortly, but for these larvae that were ready to go I needed something right away. The pithy stems of staghorn sumac (Anacardiaceae: Rhus typhina) came to mind, so I went out and broke off a dead branch from one by the driveway and used pruners to cut it into short pieces, which I put in the rearing jar. One of the purplish larvae soon took interest… 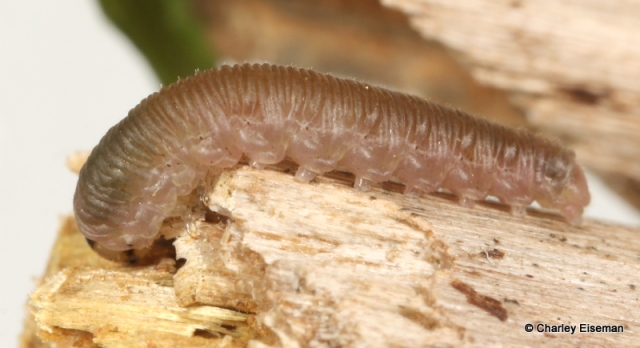 …and within a few hours it had disappeared inside. 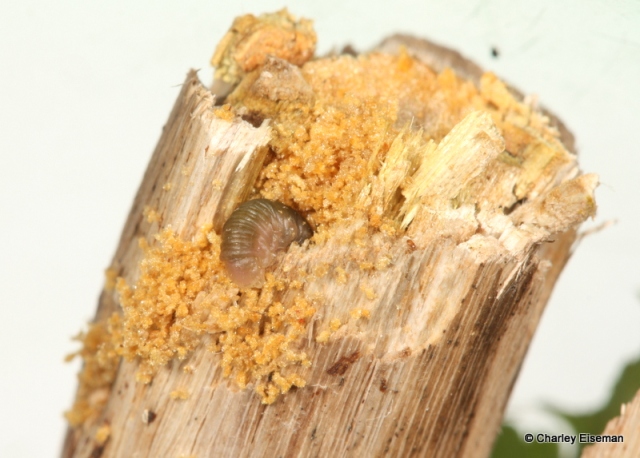 Meanwhile, the original lady fern larva with no markings on its head was acting a little restless, so I gave it a piece of sumac too, and it likewise bored right in. 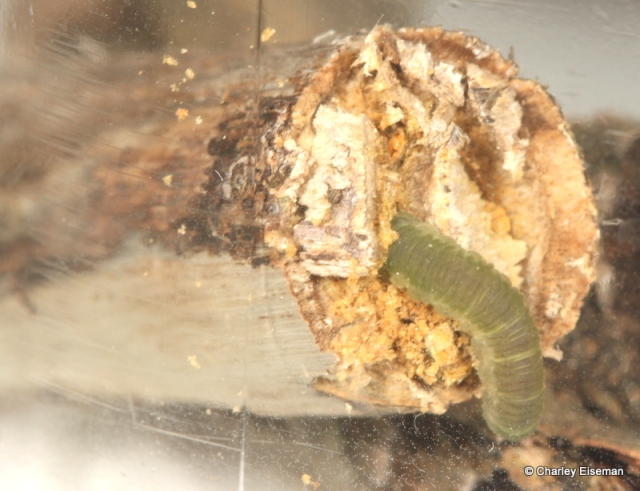 As I mentioned when I first found this one, it seemed like a good match for Strongylogaster macula, the only North American sawfly with a free-living larva that is known to feed on lady fern. So what are all these larvae with the spots and stripes on their heads? Nobody knows, but whatever they are, they’re the 11th species of sawfly larva I’ve found in my yard this spring.

My ten-foot journey to the lady ferns at the corner of the house also added three new leafminer species to the yard list—all within a meter of the fern I collected (yes, I just switched between the English and metric systems in a single sentence. You’ll just have to get used to that). Most conspicuous was… 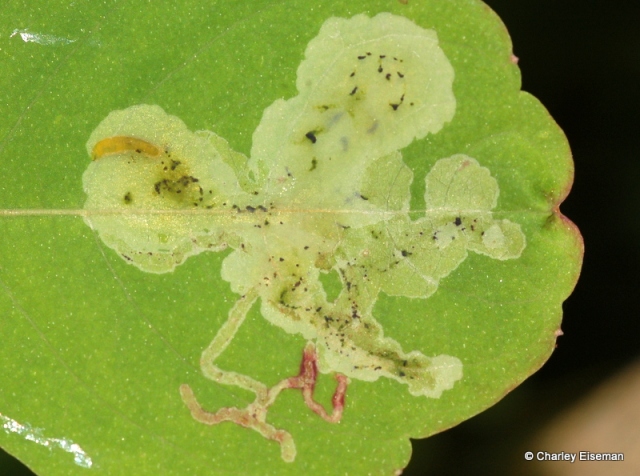 This is an extremely common species, but it took me a few years of trying before I finally succeeded in rearing the striking yellow adults: 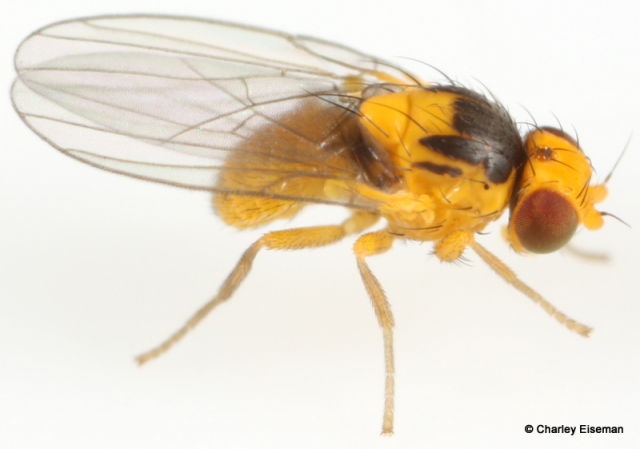 #47: Acrocercops astericola (Gracillariidae).  The young mine of this moth on an adjacent calico aster (Asteraceae: Symphyotrichum lateriflorum) was decidedly less conspicuous. 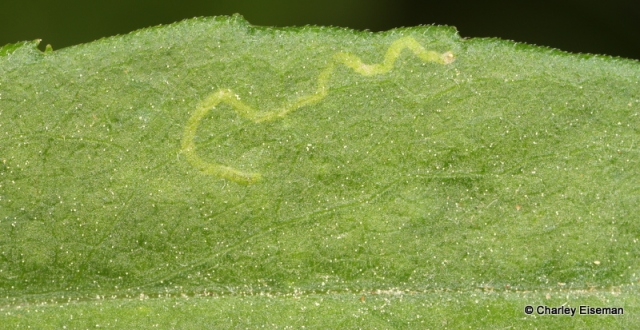 The tiny larva in this mine has just switched from making a whitish, epidermal mine on the underside of the leaf (below) to a greenish, interparenchymal mine that is visible on the upper surface (above). 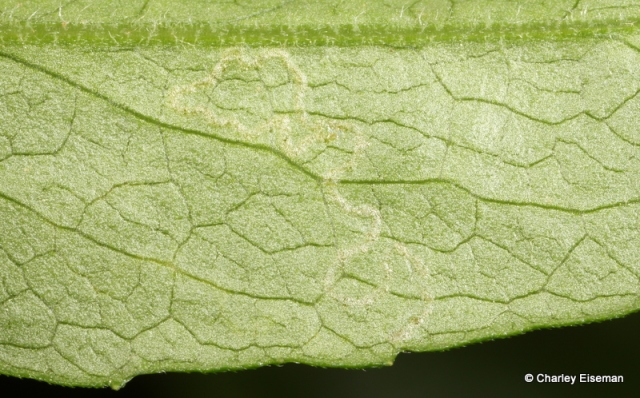 Eventually the mine will expand to a blotch that may cover the entire leaf surface, and which may cause the leaf to puff up like a balloon:

The mature larva turns bright red and exits to spin a cocoon.

The adult looks an awful lot like a Leucospilapteryx: 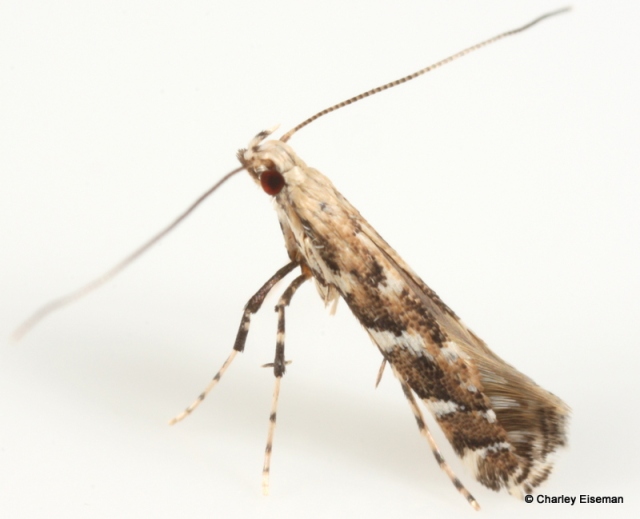 Don Davis tells me this species is in fact misplaced in Acrocercops, but he hasn’t yet figured out what the correct placement is. He doesn’t think it’s Leucospilapteryx.

#48: Chirosia pusillans (Anthomyiidae).  I haven’t seen mines of this species in my yard yet, but the lady fern frond with the two sawfly larvae and two sawfly eggs also had one egg of this fly on its lower surface: 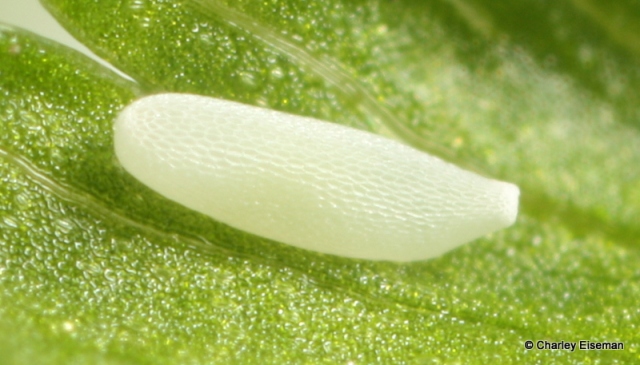 The egg is definitely the most attractive thing about this species. The mine just looks like a brown-tipped fern pinna (note the larva in the pinnule at upper right): 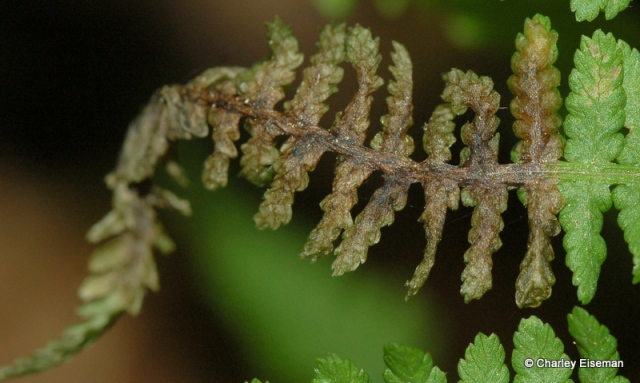 And there’s nothing too distinctive about the adult, which won’t emerge until next spring: 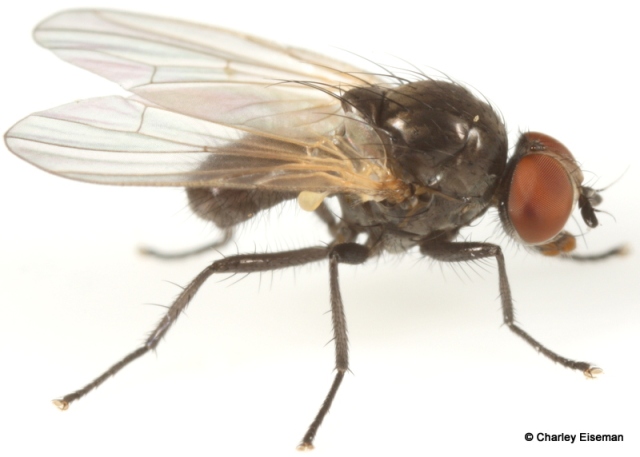 This morning as I once again searched in vain for a lady fern that didn’t already have sawfly larvae on it, I got excited because I thought I had found a larva that had just hatched, still sitting next to its egg. Under magnification, it proved to be a sawfly egg next to a Chirosia egg.

In this sawfly egg you can really see the little larva curled up inside, its face smooshed against the right end: 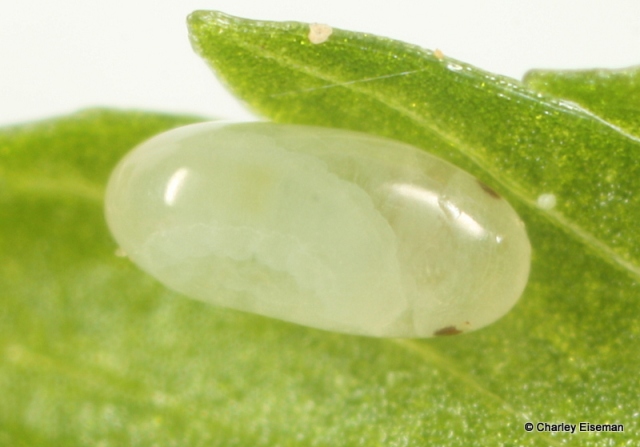