Posted on September 30, 2012 by Charley Eiseman

Last night after going through my cooler full of vials and dealing with everything that needed to be dealt with–some flies that had emerged from Delphinium leaves I had plucked from my mother’s garden several weeks ago; sawfly larvae that had popped out of a recently collected thimbleberry leaf and wanted some soil to burrow into–I was about to go to bed when, reaching to turn out the light, I spotted this beautiful little moth, just a few inches from the light switch: 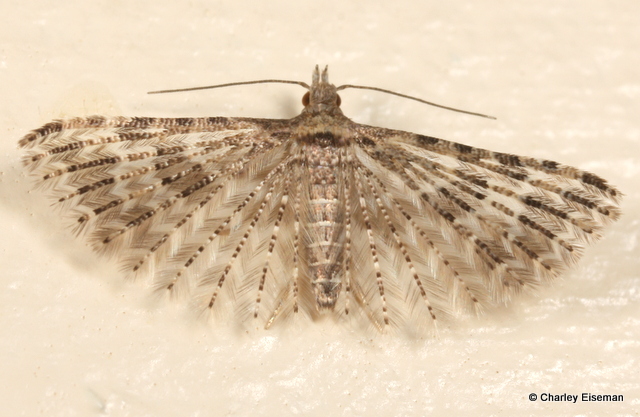 Its wingspan was only about a centimeter and I couldn’t see all this detail, but I could see that it was something special that warranted dragging out my macro lens and delaying bedtime by a few minutes.  After taking a few shots and reviewing them on my camera’s screen, the name “many-plume moth” popped into my head–not something I’ve seen before in person, but something I’ve come across when browsing images at BugGuide.Net. This morning I did a quick online search and learned that there are three North American species in this family (Alucitidae) and all of them feed on honeysuckle (Lonicera) or snowberry (Symphoricarpos).  The host plant is surely snowberry in this case; I’ve lately been struck by the abundance of this shrub everywhere from the Black Hills of South Dakota to northern Idaho (where I am at the moment).  Snowberry is rare in New England, and there is just one known population in my native Massachusetts (see this fact sheet I wrote for the Massachusetts Natural Heritage & Endangered Species Program). 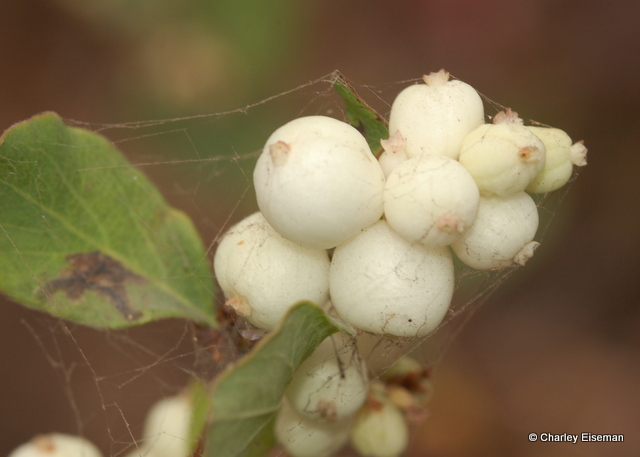 Western snowberry fruits and the leaf mine of an agromyzid fly. (Don’t ask me what made the web.)

I’m not certain which species this moth is, but I suspect it’s the Montana Six-plume Moth (Alucita montana).

An aside: After my last post, someone asked, “Can I contribute to your work financially in my own small way?”  The answer is: Yes!  If you look near the top of the right sidebar, you will see a yellow “make a donation” button below the list of recent posts, above the image of my book’s cover.  Although I don’t expect many people to make donations, it would be a shame if there were other folks out there who wanted to do so and didn’t realize it was possible, so I just thought I’d mention it.  (This hobby has gotten a little expensive, with all the photographic equipment and the mailing specimens around the world and the driving all around the country.)

And now, assuming there’s nothing interesting waiting by the light switch tonight, I’m off to bed.

I am a freelance naturalist, endlessly fascinated by the interconnections of all the living and nonliving things around me. I am the lead author of Tracks & Sign of Insects and Other Invertebrates (Stackpole Books, 2010), and continue to collect photographs and information on this subject. These days I am especially drawn to galls, leaf mines, and other plant-insect interactions.
View all posts by Charley Eiseman →
This entry was posted in Uncategorized and tagged Alucita, Alucitidae, Caprifoliaceae, many-plume moth, moth, snowberry, Symphoricarpos. Bookmark the permalink.