Posted on September 11, 2013 by Charley Eiseman

In yesterday’s mail I was pleasantly surprised to find a copy of Raymond J. Gagné’s new paper on hackberry gall midges*.  As promised, I am following up with more information on the galls pictured in this post from two years ago.  There were previously ten named gall midge species in the genus Celticecis associated with hackberries (Celtis spp.); as of this publication, there are 21 Celticecis species plus two in other genera. 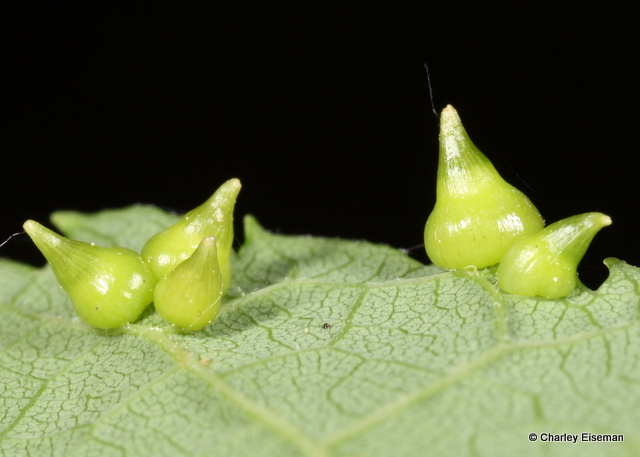 The above galls (and maybe some others from the same tree) are apparently the only hackberry midge galls ever collected in New England.  Although the paper reports that they were collected in Burlington, Vermont on June 28, 2011, I actually found them in the nearby town of Essex.  I did, however, photograph this gall in Burlington three years earlier, and it presumably belongs to the same species: Celticecis spiniformis, first described in 1897.  As with the hickory midge galls, Dr. Gagné has suggested common names for all of the hackberry galls, and he calls this one the “hackberry thorn gall.”  The ones I collected (up to 3.5 mm long) were immature; in mature galls, the base is flared outwards as seen here.

These 6-mm galls, which I photographed in Mississippi on July 9, 2008, look an awful lot like the newly described “hackberry awl-shaped gall” (C. subulata).  However, when I showed Dr. Gagné this photo three years ago he said they were young C. spiniformis galls. His paper does note that C. spiniformis galls “reach their ultimate length [of 4-6 mm] as a narrow cone before the base broadens to its full width, so young galls can be confused with those of C. subulata.”  Mature C. subulata galls are 6-9 mm tall and 2-3 mm wide at the base.

I found these galls in Mississippi on the same day.  The abrupt tips identify them as “hackberry aciculate galls” (C. aciculata), another newly described species.  This photo appears in Tracks & Sign of Insects labeled as C. unguicula, but that name is now considered a synonym of C. spiniformis.

I can be sure that these galls, found in Kentucky on May 27, 2011, are the newly described “hackberry horn galls” (C. cornuata), because the two photos used to illustrate this species are of this very same leaf, which I sent to Dr. Gagné.  One of the distinctive things about these galls is that when they drop off the leaf, little circular pads remain at the attachment points.  In the paper’s Figure 17, only the gall to the far right and the small one to the left are still attached. 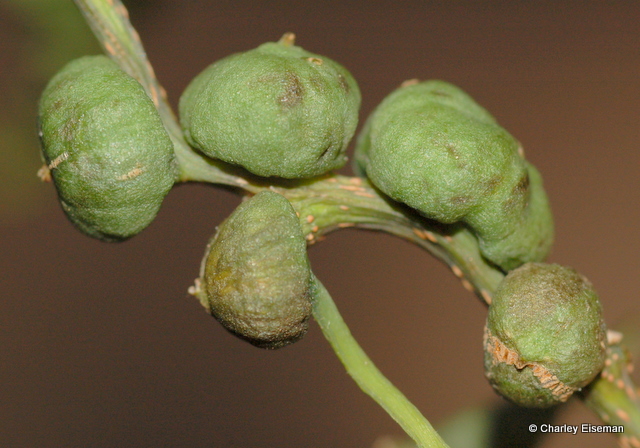 These galls, which I collected in Bowling Green later that same day, comprise the Kentucky record for the newly described “hackberry aggregate gall” (C. connata).  Unlike all the previous galls, these are normally found on plant parts other than leaf blades (usually along twigs; occasionally on fruits, petioles, or major leaf veins).

The photo above and all the ones below were taken in Nashville, Tennessee.  This is another one that was described in 1897, being a pretty distinctive gall: sparsely hairy, circular and flattened with furrowed sides and a central spine.  It is C. capsularis, the “hackberry rosette gall.” 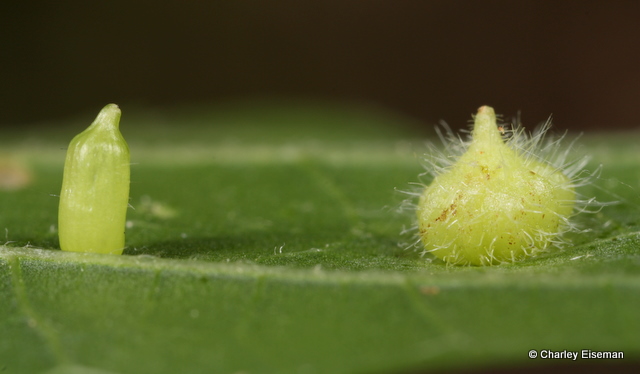 I think the gall to the left is another immature C. spiniformis.  The one to the right is another C. capsularis, though at first I mistook it for C. acuminata, the newly described “hackberry narrow-tipped gall.”  The latter is not listed as having been collected in Nashville, and I sent Dr. Gagné examples of all the galls I found that day. 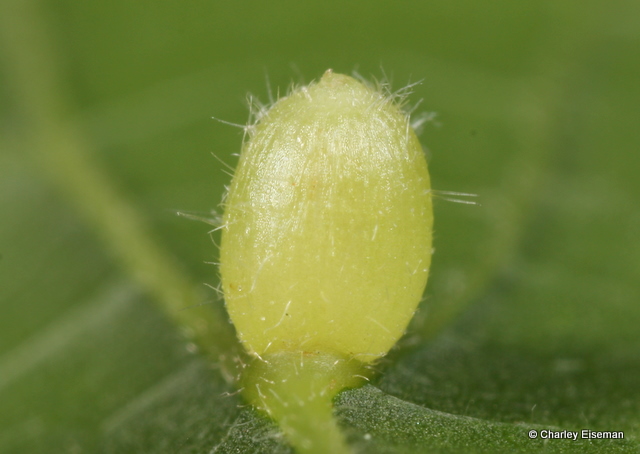 The best match for this one seems to be the newly described “hackberry globular leaf gall,” C. globosa.  Galls of this species are always attached to leaf veins.  This one is also not listed as having been collected in Nashville, but I don’t see another contender that is.  I think I only found one of these; possibly I failed to include it, or Dr. Gagné missed it, or maybe I’m missing something.

This one is the newly described “hackberry recumbent gall,” C. supina.  It is always reclining and is likewise always attached to veins, although in this case it’s a minor vein and not obvious in the photo. 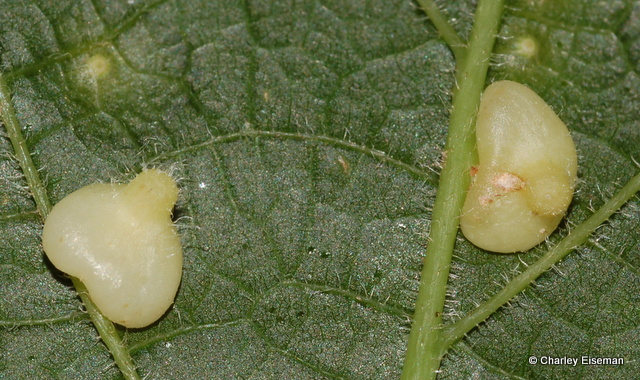 These were also found in Nashville, but unfortunately it was back in July 2008, before I was collecting for Dr. Gagné.  When I showed him this photo, he said these galls were unknown to him.  They most closely resemble the newly described “hackberry pear-shaped gall” (C. pyriformis), which like these is attached to leaf veins.

Those are all the species I have represented in my own photos; now to tackle the ones on BugGuide!

I am a freelance naturalist, endlessly fascinated by the interconnections of all the living and nonliving things around me. I am the lead author of Tracks & Sign of Insects and Other Invertebrates (Stackpole Books, 2010), and continue to collect photographs and information on this subject. These days I am especially drawn to galls, leaf mines, and other plant-insect interactions.
View all posts by Charley Eiseman →
This entry was posted in Uncategorized and tagged Cecidomyiidae, Celticecis, Celtis, Celtis occidentalis, gall, gall midge, hackberry, midge. Bookmark the permalink.